The summer of 2018, my boyfriend and I adopted a beautiful little rescue dog from Tennessee and named her Callie. She was 10 months old, had the most beautiful brindle coat, and was fully vaccinated and spayed, on paper. We had intentionally adopted an older pup so we could skip all the puppy expenses and enjoy the benefits of a fully vetted pup.

And then our spayed female dog went into heat.

In retrospect, the first red flag was when we noticed that Callie had no noticeable incision scar or shaved stomach when we first brought her home. Her records indicated she had been spayed just ten days prior, and her foster mom had even texted me the day she had gotten spayed saying it went great. We decided to trust that if it was written in an official veterinary record from an animal hospital in Tennessee, then it must be true. Maybe she was a fast healer? Maybe those dissolvable sutures were magical?

There’s no way they could have messed that up, right? 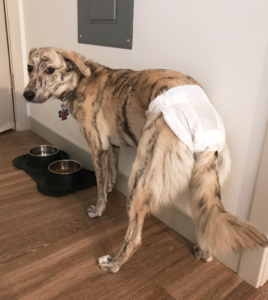 Callie went through 3-4 doggy diapers a day while in heat.

Five months later, with Callie settled into our home and everything going well, my boyfriend called me one afternoon. He had come home from work to numerous blood spots all over her bed, across the floor, and in her crate, seemingly coming from her vulva.

It clicked for both of us almost instantly. We should have trusted to our gut. Callie was going into heat, and the problem we had brushed off a few months ago was now staring us right in the face.

Medicine is not black and white

In medicine, everything must be diagnosed before it can be treated. And unfortunately, medicine is not black and white. It can be quite frustrating for both pet owners and medical professionals to not get clear results or diagnoses even when things seem obvious. And that was the very essence of Callie’s case!

Callie saw Dr. Sheila Bennett, her primary care vet at Bulger, for an exam a day after she started bleeding. Just like us, she suspected that something fishy went on with her spay procedure in Tennessee. But before jumping into surgery, we needed diagnostic evidence. Our options were: 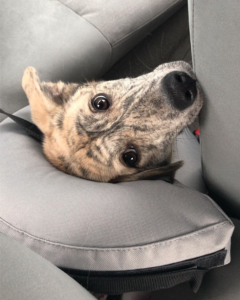 We tried an inflatable cone to keep her from chewing her diapers, which did not work. We then bought a plastic Elizabethan cone which worked much better!

So we went with option #2: just an easy blood draw and we’d have our answer right? Not quite! Callie’s first progesterone level results came back far too low (<1.0) to confirm she was in heat. So we explored the possibility of a urinary-related issue and tested a urine sample. The urine results were also unclear. We put her on an antibiotic trial while we waited for more time to pass between her next progesterone test, but the blood kept flowing.

Callie’s next progesterone test a couple weeks later was somewhat higher, though still under 1.0. Ugh.

Finally, after a third progesterone test, her levels finally soared to >30 (whoa!) and her mammary glands and vulva were noticeably larger and swollen. Confirmed at last, and 4 weeks in doggy diapers and a cone later (and lots of patience and from Dr. Bennett,) we finally had a diagnosis!

I booked my spayed dog’s spay procedure a month out to allow her time to finish her heat cycle. A couple more weeks of diapers later, her bleeding stopped and we just had to wait for the big day!

The ovariohysterectomy of my spayed dog

“I had to do a double take at her record because it says she’s a spayed female, but she’s here for a spay!” Callie’s surgery technician remarked. 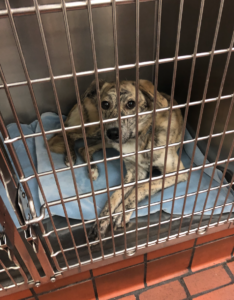 Waiting patiently in her kennel before her spay at Bulger.

I dropped Callie off at Bulger early on a Friday morning for her ovariohysterectomy, for real this time. I kissed her goodbye as she disappeared out back, sad that she had to go through this (for the second time) but knowing she was in the best hands possible.

Later that afternoon, Dr. Bennett let me know that her spay went great and she was recovering in her kennel, almost fully awake now. As we suspected, she was fully unspayed and her reproductive organs had not been touched. She stayed overnight at Bulger for monitoring and we picked up our excited, newly spayed dog the next morning. Her discharge instructions were clear and concise, a small meal when we get home, pain medications twice a day, and short leash walks only for a while. Back in the cone of shame, post-surgery.

Callie was a bit confused and dazed at first but by the end of the weekend, she was back to her silly old self! Her stitches dissolved, her incision site healed, and after three months of diapers, cones, medications, and frequent visits to Bulger, we finally had our spayed rescue dog!

I have to say, seeing her incision scar after left us feeling pretty silly for ever thinking that just 10 days after her initial “spay” we wouldn’t see anything.

So how did this happen?

We still don’t know. We reached out to Callie’s rescue organization and they were just as baffled as we were. When they tried to reach out to the veterinary hospital in Tennessee who had “spayed” Callie, they stood by their false records and  provided no reimbursement (or empathy, may I add). Luckily, Callie’s adoption coordinator and the director of the rescue were more empathetic and reimbursed me for the procedure out of their own money and kindness, along with providing support and apologies for all the confusion.

Healing from her spay

How a dog can go into a hospital for a spay and walk out un-spayed will remain an unsolved mystery.

As I’ve told our story, I’ve heard similar cases with Southern rescue dogs. Perhaps they’re spaying so many dogs a day that they miss some every now and then, or perhaps it was something more malicious, or just a fluke. Did she ever even go under anesthesia? We actually chuckle at the idea of her going into the hospital and emerging victorious; evading surgery like a sleuth! We’re just glad it’s all over, our Callie girl is happy and healthy, and it didn’t end with an accidental litter!

My advice to anyone rescuing or adopting a dog: not everything is black and white. I’m not saying don’t believe medical records, but proceed with caution and trust your gut. Rescue dogs are like a box of chocolates, you never know what you’re going to get!