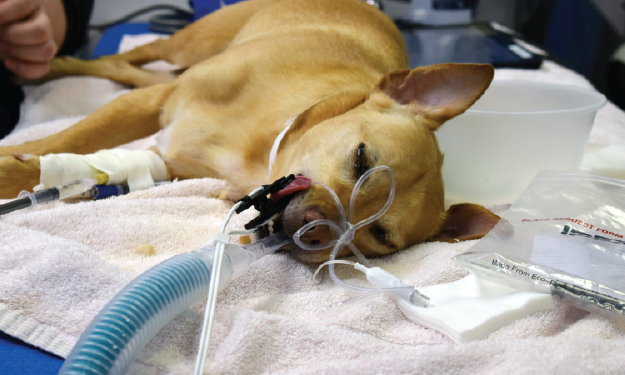 “This is the fourth case of a canine knee injury I’ve seen today,” said Dr. Blaeser as she examined my dog’s torn cranial cruciate ligament (CCL) at his Bulger Veterinary Hospital surgery consult. A dog tearing his/her CCL is the human equivalent of tearing your ACL, it’s quite painful and requires a long recovery. A torn CCL is a relatively common injury in dogs of all sizes, shapes, breeds, and ages and generally treatment involves surgery. A couple of weeks after what seemed like a silly accident, I was scheduling my dog, Brady, for a lateral suture procedure to repair his knee. A torn CCL can sound scary, as it did for me, but with proper diagnosis, treatment, and recovery it can be repaired, and your dog will be back to sprinting across the yard.

It all started with a classic case of the zoomies on a Friday afternoon in February. Brady is usually pretty lazy, but after his baths he runs back and forth at full speed between rooms. This particular afternoon I heard a loud crash in the other room. He had slid on the hardwood floor and crashed into a chair and when I went to check on him, he was limping on his right hind leg. Having worked in the veterinary industry for a few years now, I decided to give it the weekend to see if the limping would get any better in hopes that it was just sore or bruised. But on Monday when he was still non-weight bearing, I decided it was time for a trip to his regular veterinarian.

Following a physical examination and a little manipulation of his leg, Brady’s vet suspected a torn CCL. It was a bit of a shock to me because I had only ever known it as something that happened to large, athletic dogs. Meanwhile Brady weighs a grand total of 22 pounds and his biggest adventure of the day is switching from one of his beds to another. I knew that such a surgery can be expensive, and I was already kicking myself for not enrolling him in pet insurance sooner. His vet explained that he had likely partially torn his knee well before that Friday and this small accident had finally ruptured it completely. She wrote up a referral to the surgeon at Bulger and sent him home with some Previcox for pain and inflammation.

That’s how we ended up at Bulger Veterinary Hospital for a surgery consult with Dr. Lauren Blaeser, DVM, DACVS. After examining his leg, she confirmed that Brady had torn both his CCL and his meniscus. Using a canine knee model, she explained that the CCL is one of the most important stabilizers in a dog’s knee. The meniscus is a cartilage-like structure between the femur and the tibia and is commonly damaged when the CCL is torn. Brady had developed a complete rupture and needed surgery to restore mobility and relieve pain. Since he is a small, inactive dog he was a candidate for a lateral suture rather than a Tibial Plateau Leveling Osteotomy (TPLO) or Tibial Tuberosity Advancement (TTA), both of which can be a more complex surgery. With his diagnosis and treatment plan in hand, we scheduled his surgery for two weeks later.

I dropped Brady off at Bulger early on a Wednesday morning, his procedure was completed within a few hours of his drop off. The lateral suture procedure, also called extra-capsular suture stabilization, is a technique in which a suture is placed in his knee to mimic the function of the ruptured CCL. He was completely anesthetized, given a nerve block to assist further with pain management, and woke up with a shaved leg and a brand-new knee thanks to Dr. Blaeser and her team of surgery technicians! He stayed overnight at Bulger as a precaution to ensure his pain could be managed and to prevent any complications. The overnight technicians and doctors kept a close watch, providing treatments on the hour, and gave him extra love to keep him calm and let him get some rest. By the morning, he was ready to go home!

Brady was discharged to our care with a buster collar (a.k.a. the cone of shame) and three different medications to manage pain, infection, and inflammation. When we got home, he was tired and dazed, but antsy. With lots of rest, he was better by morning and ready for a big breakfast. His incision site had some bruising and tenderness for a couple of days, but the cold and warm compresses we were instructed to administer on discharge, helped. By the end of day three, he was back to his normal self. Brady had a couple of post-op appointments to remove his sutures and monitor his progress. I took him on short walks, forcing him to walk slowly so he would start using his leg, and before I knew it he was putting weight on his leg again.

The whole process from start to finish took just a few months for Brady to be back on his leg. He did not require any physical therapy or sports rehabilitation due to his size and age. Dogs normally do benefit from physical rehabilitation, as it helps to restore the knee muscle and tissue and prevents tearing in the other knee.

Brady’s diagnosis was scary at first, but at every step of the way I was assured that Brady would be okay, and he was in good hands. End Note: Brady had never been sick or injured his entire life, until this episode. It is an expensive procedure and there is a high risk that he could also tear his other CCL in the future. Even if your pet is healthy and lives a quiet life, a CCL tear can happen to any dog, and sometimes even happens in cats, though it is more unusual. Take it from me, pet insurance can really help with a costly injury like this so don’t wait until it’s too late!