Let’s face it: cats are weird. Or at least, cats do weird things. From the noises they make, to the risks that they take, to the stuff that they break – they never fail to keep us entertained.

But not everything cats do is senseless. In fact, most of the strange things they do can be explained, or at least theorized, based on behavioral norms and instinctual patterns dating back to their wild days. Because cats were domesticated at least 5,000 years after dogs, we see a lot of these behaviors still shining through in everyday life.

They may be neurotic, proud, bipolar, and independent, but they’re also beautiful, intelligent, loving, and to me, they’re just purrfect. Here are some of those weird things cats do explained:

What: Cute meows, long and sorrowful howls, and playful chirrups; there’s a different noise for every occasion. And if you’re familiar with Maine Coons, you know the true meaning of a chatterbox! Why: Cats possess one of the widest ranges of vocalizations in domestic pets. The classic “meow” is used mostly to communicate with humans to let us know when they need something or if they’re lonely or ill. The “chatter” or “chirp” are often used when a cat’s predatory excitement gets the best of him/her while bird watching or bug hunting. A long, drawn-out “yowl” can indicate worry, discomfort, or just boredom.

We love it because: This is how our cats try to talk to us, and we all know communication is key in any good relationship.

What: We’ve all been there. One minute you’re petting your cat and everything is fine. Completely normal. Then suddenly four sets of claws and matching teeth are sinking into your arm. So why do cats bite the hand they love? Why: It has been theorized that cats suddenly turn on you for a few different reasons. One may be that cats seek to control the situation. Another is that there is some neurological stimulation caused by being pet for too long. There’s also the idea that we just don’t read our cats very well and so when they no longer want attention, their change in attitude appears to be more sudden than it actually was. In some cases, increased aggression can also mean lack of exercise or something going on internally that’s making your cat uncomfortable.
We love it because: You get to explain to everyone why your arm looks like you battled Edward Scissor Hands, which is always answered with “that’s why I’m a dog person.”

What: You haven’t felt true fear until you’ve looked over the side of your bed and you see the enlarged pupils of a wiggling cat that’s about to attack. Why: Thankfully, cats usually do this as a form of play and attention; they’re not actually trying to hunt and kill you. Phew. Sometimes they even learn from your reaction, so when you cry out and chase after them they think it’s even more fun! This is just normal behavior that they are used to from playing with fellow cats.
We love it because: It’s like a fun, though dangerous, game.

What: It’s that infamous moment you hear something gently scraping across a surface as your cat paws it across the table, and then KURPLUNK onto the floor. And your cat just looks down at it with an un-guilty look of satisfaction. Why: Your cat isn’t just being a jerk. I know I know, that’s hard to believe. One possibility for this behavior is that they instinctually use their paws to explore objects and feel things out, especially while hunting. Furthermore, just like when they pounce on you they learn from your reaction and they realize that knocking stuff over gets their owner’s attention (even if it’s not positive attention.) Sometimes, though, they may just do it for fun.
We love it because: It’s really quite funny to watch, unless something breaks. Then it’s only funny later.

What: Turns out, cats can be beggars too and they would prefer if you would share that sloppy Joe sandwich with them, please. 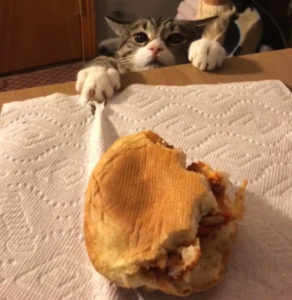 Why: This has been found to simply be a bad habit. Once a cat gets a taste of human food, they will sometimes go to great lengths to get some more. This can be very bad, as an average 10-pound cat eating just one ounce of cheese is the caloric equivalent to a human eating 2 ½ hamburgers! Yikes! Moral of the story: don’t start feeding your kitty table scraps. You won’t have to stop what you never start!
We love it because: For a moment, your cat becomes really interested in you!

What: An eruption of sheer madness and utter chaos across your entire living space. In the wee hours of the morning, your cat has decided to rampage through the house whilst yowling at every stop. May include: tipping stuff over, scratching things they’re not supposed to, and trampling your face. Lucky you. Why: Nocturnal hyperactivity can be caused by too much energy buildup without appropriate release. Since much of the day is spent snoozing and they’re already instinctually hardwired to hunt prey at night, the result is the midnight crazies. So play with your cat before bedtime!
We love it because: We don’t.

7. On This Episode of Hoarders

What: Do your bobby pins and hair ties mysteriously go missing? Have you ever lifted something up and there’s a little stash of cat toys and various other junk underneath it? Or perhaps there’s cat toys suddenly appearing in their water dishes or in your shoes? Welcome to cat hoarding 101!

Why: Gathering and stashing is not something cats are known for in the wild. So, it has been thought that domestic cats collect and hide things because it simulates bringing food back to the home base to eat in peace and safety after hunting and capturing it. Others have suggested it goes back to their days of tending to their young, where even though that is not the role of the male cat they still learn and know how to do it.
We love it because: Once you find their “spot”, you’ll know where to go to find all your missing stuff! Plus, you never know what you’re going to find!

What: Got a nice sheet of paper lying around? Perfect place to sit. An empty cardboard box? Even better. Trying to do some work on your laptop? I don’t think so, I’ll just sit right on your keyboard thank you! 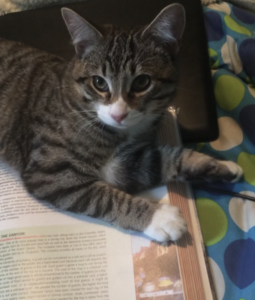 Why: Cats like to sit on things, especially if you’re using it. One explanation is that cats are extremely scent-driven and if the object smells like you it makes them happy (aw cute, huh?) They also may do it as territorial behavior, where rubbing or laying on something transfers their pheromones to establish ownership. Another theory is that it has to do with their body temperature and they’re just trying to find a warm place to sit. And again, they may just want attention.
We love it because: It is an awfully cute distraction, though not the best excuse to tell your boss.

And there you have it! Do you feel at least a little more confident that your cat isn’t a disturbed, crazy, evil genius now?