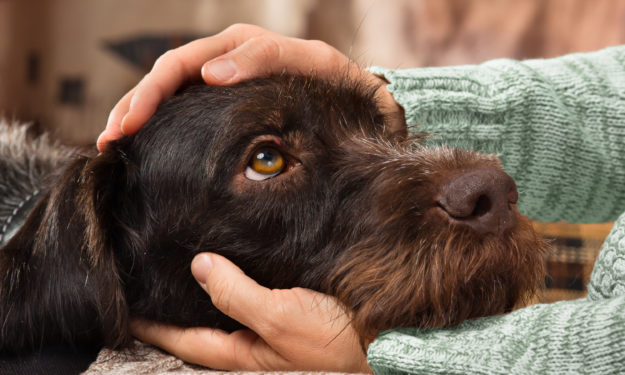 What is a seizure?

The word seizure, convulsion, attack, or fit describes a sudden abnormal electrical event in the brain that temporarily interrupts normal brain function. Chaotic electrical activity replaces the normal electrical signals coming from the brain cells and results in the abnormal function we observe in the animals.

There are many different diseases known to cause seizures in animals. Anything that can change the function of the neuron within the brain may produce a seizure. Your veterinarian or veterinary neurologist determines the cause of the seizures through a complete physical and neurological examination plus appropriate diagnostic testing.

What causes a seizure?

The cause of seizures is usually classified into two categories; extra-cranial (causes outside of the brain) and intra-cranial (causes inside of the brain). Metabolic disorders and toxicities are the two main causes of extra-cranial seizures. Metabolic disorders include hypoxia (low oxygen), hypoglycemia (low blood sugar), hepatoencephalopathy (liver malfunction that allows toxins to build up), hyperlipoproteinemia (specific syndrome primarily seen in schnauzers), electrolyte imbalances (calcium, sodium, and potassium), and hyperthermia/heat stroke.

The three phases of seizures

Most seizures occur in three stages. The first part of the seizure, called the ‘aura’ often is not noticed. Owners who have dealt with seizures in their epileptic pets are often aware of certain changes in their pets’ behavior prior to a seizure. The pet often shows signs of apprehension, restlessness, nervousness, or salivation. Some pets can become clingy while others may withdraw.

The second stage is the ‘ictus’. The ictus usually lasts for 1-3 minutes. It often seems longer to an owner. During the seizure, the animal usually collapses on its side and has a series of violent muscle contractions that cause the body to be rigid and the legs to paddle. Loss of consciousness, salivation, involuntary urination and defecation may also occur in more severe seizures. A less common form of milder seizures occurs without loss of consciousness with the animal developing stiffness, uncontrolled trembling and attempting to crawl or move to the owner. There is no standard type of seizure and other variants do occur.

The period immediately following the seizure is the post-ictal phase. It usually lasts less than an hour but may last many hours or even days. Some pets are confused, disoriented, restless and temporarily blind during this period. They are usually tired, but typically want to eat and drink.

Is there a cure for an epileptic animal?

There is no cure for idiopathic epilepsy. Seizures can be controlled with anticonvulsant drugs in most cases. Unfortunately there are a small number of epileptic dogs in which the seizures can not be controlled. The purpose of treatment is to decrease the frequency, duration and severity of the seizures. Generally 1 seizure per month is considered good control. Treatment is started with one anticonvulsant, but several drugs or a combination of drugs may be needed before a successful treatment is found.

Impact on quality of life

Despite all our efforts, some seizure disorders are impossible to control. Trying to balance the number of seizures with the side effects of medication can be difficult. Rarely, patients may require so many medications that their quality of life is compromised. If this happens, veterinarians and clients will need to decide what is in the best interest of the individual patient.

What should you do if your dog or cat has a seizure?

Seizures are very frightening and scary to pet owners, especially when it is the first seizure. Owners should take certain steps during a seizure to prevent injury not only to themselves but also to their pets. Keep in mind that dogs and cats do not experience pain during a seizure, or even remember it, as they are unconscious during the event.

• Ensure your pet is on the floor away from objects (corners of coffee tables). Do not allow the pet to fall off furniture or down stairs.

• To prevent choking, make sure that collars or leashes do not get caught on protruding objects.

• Keep your hands away from the mouth! Animals are unconscious during typical seizures. They have no control over their mouth and jaw muscles and may bite anything put in their mouth.

• Dogs can not swallow their tongues despite what you may have heard. Do not attempt to restrain the dog or pull the tongue during a seizure.

• Please be aware that some pets will vocalize, salivate, urinate or defecate during a seizure. Their limbs may become rigid and they may paddle. These actions are involuntary.

• Most seizures last 1-3 minutes and are not life threatening. If the pet has repeated seizures and fails to regain consciousness between the seizures, or if a single seizure lasts longer than 5 minutes, it is in status epilepticus. This is an emergency and your pet needs to be seen by a veterinarian immediately. If your veterinarian is closed, you should go to the nearest emergency hospital. You can pull your pet onto a blanket and then lift the blanket to get them in the car for transport.

What if it is not idiopathic epilepsy?

Your veterinarian will perform a physical and neurological exam and run the appropriate diagnostic tests to evaluate the cause of the seizures. Your veterinarian may refer you to a veterinary neurologist for additional testing and treatment. Tests that may be recommended include a CBC (complete blood count), chemistry profile (blood test), urinalysis, x-rays of the chest and/or abdomen, blood pressure, abdominal ultrasound, certain infectious disease titers (specific blood tests), CSF analysis (cerebrospinal fluid analysis), and advanced imaging with MRI as the gold standard.