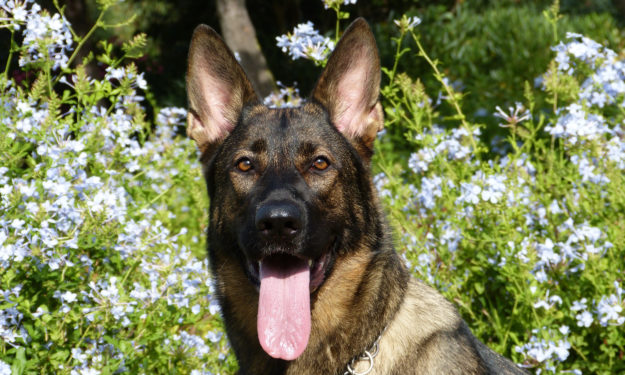 The German Shepherd Dog, originating in Germany in the 1880s, was bred to be a multipurpose working dog.  The German Shepherd has played many roles over the years including, among others: herding sheep, military field work, search and rescue, guide dog and police dog. German Shepherds have been popular in America since the early 1900s and have remained on the American Kennel Club’s most popular list for many years; they have been in the top five for the last ten years. Some well known German Shepherds include Rin Tin Tin, Roy Roger’s Bullet, and Buddy, the nation’s first Seeing Eye Dog.

A common ailment among German Shepherds is bloat, or gastric dilatation volvulus (GDV). This is a life threatening condition where the stomach rotates on its axis, cutting off the passage of food and water, and inhibiting circulation to the stomach and intestines. Bloat generally occurs in large, deep-chested dogs such as Great Danes, German Shepherds, Standard Poodles, Weimaraners, Saint Bernards, and Newfoundlands but has been seen in small dogs on rare occasions.  It is a very serious condition that occurs when a dog’s stomach fills with gas and then rotates causing further distention and a series of severe complications.

Patients typically present with non-productive retching, restlessness and abdominal discomfort. The first signs of bloat may include a distended stomach, retching, or dry heaving.  A distended abdomen may not always be noticeable due to the dog’s conformation.  If these symptoms are seen, immediate medical attention must be sought! The cause of the GDV is unknown, it is thought to have multiple contributing factors.

How Do Dogs Get Bloat or GDV?

That is the million-dollar question. No one knows the exact cause of why bloat happens; however large breed, deep chested dogs are more likely to bloat than other breeds. Older dogs are also more commonly seen with “bloat” than younger dogs. In some cases, eating or drinking large amounts and then being active is thought to cause bloat. There is also thought that eating out of elevated food dishes may increase chances of GDV as dogs may swallow more air when eating. Unfortunately, there are  times when dogs present with bloat with no predisposing cause; and, although it is much less common, small breed dogs can also suffer from GDV or “bloat”.

Factors Suspected to Increase the Risk of Bloat

Factors Suspected to Decrease the Risk of Bloat

Dogs with bloat can be restless and unable to get comfortable or lay down. They will hyper salivate/drool and try to vomit but nothing will come out. They can have very distended abdomens that can be very painful. They may also have very fast heart rates and changes in breathing. In severe cases, they may collapse or be unable to stand. It is very important that if you see any of these signs that you have your dog evaluated by a veterinarian immediately. As veterinarians we understand that each dog can show different variations of these signs; if there is any concern an owner can always call a veterinary clinic and ask their opinion.

Why is Bloat an Emergency?

Bloat sets off a cascade of damaging events to the body. As the stomach fills with air it expands and starts to cut off blood returning to the heart. The expansion of the stomach then puts pressure on the diaphragm, making it difficult for the dog to breath. The stomach then starts to rotate cutting off the blood supply to the stomach. When the stomach rotates it can entrap the spleen and thus cause damage or cut off blood supply to the spleen and even rupture blood vessels. All of these changes lead to the dog going into shock. Blood pressure drops, arrhythmias and internal bleeding can occur as well as sepsis. Unfortunately, death can occur in a matter of hours if bloat goes undetected and untreated. All of these changes happen very quickly, which is why it is so important for an owner to recognize the signs of bloat and get them to a veterinarian as soon as possible.

Emergency veterinary medical attention must be sought for treatment of bloat. Unfortunately, there is nothing that an owner can do at home.

Abdominal x-rays are the most reliable way to assess stomach position and diagnose bloat. Stabilization of the patient and diagnostics must be performed immediately. These dogs require pain medication and intravenous fluids. Surgical intervention is a necessary step in the treatment of bloat and should be done as soon as the patient is stable enough to undergo anesthesia and surgery.

During a bloat circulation can be compromised and other abdominal organs, such as the spleen or intestines, may be affected, as a result the spleen may also need to be removed in some cases.  Bloat, requires a multiple day stay in the hospital for post-operative care and recovery. If not treated by a veterinarian immediately, bloat can be fatal. Most dogs who are diagnosed and treated early in the development of bloat recover from surgery and can lead a normal life.

The surgery consists of de-rotating the stomach back to its normal position and then tacking it to the body wall. This is called a gastropexy. If the spleen was involved in the twisting, then it may have to be removed as well. Even after the surgery is performed these dogs are not out of the woods. There are many complications that can still arise after surgery and it is very common for these dogs to be in the hospital for multiple days. As many as 15-30% of dogs will not survive bloat even with immediate care and surgery.

Recommendations for preventing bloat are feeding several small meals a day, discouraging drinking large amounts of water at one time, allowing some time between eating and activity, and feeding on the floor.

Hopefully knowing some of these preventative tips will decrease the chances of your furry family member bloating; however, if you see the signs listed above do not wait! Get your pet to an emergency veterinary hospital immediately. Ideally call ahead so they know you are coming and can plan for your arrival. Time is of the essence.