Electrochemotherapy (ECT) is a local treatment for cancer using a combination of chemotherapy and electric pulse therapy which increases the antitumor effect of the chemotherapy drugs.

The procedure uses short high voltage pulses generated via an electric pulse generator machine. Once the pulses have been delivered, the cell’s plasma membrane has increased permeability to the chemotherapy agent which is administered either intratumorally or intravenously.

The two chemotherapeutics that have shown the most promise and are used most commonly are bleomycin and cisplatin.

Various mechanisms of action of ECT have been described.  Electropermeabilization of the tumor cells leading to increased intracellular drug accumulation, vascular effects, and an increased immune response appear to be the most important.

The principal mechanism of action is increased cellular uptake of bleomycin or cisplatin by exposure of the tumor cells to an electric field (Fig. 1).

The last mechanism of action involves antigen shedding by the tumor cells that are destroyed by ECT which can induce some systemic immunity.

Based on the various mechanisms of action of ECT, antitumor activity should be observed in many different types of tumors treated, regardless of their histological type.

The treatment procedure consists of anesthetizing the patient, injecting the chemotherapy either intratumorally and/or intravenously, waiting the appropriate amount of time and then applying the electric pulse (Fig. 2).

In order to get good contact between the electrodes and skin, KY or ultrasound gel is used.  Only minor immediate side effects have been noted in people and animals treated with ECT. The most common side effect reported is involuntary contractions/spasms of the underlying muscle in the treated area, but the spasms are only present during the application of the electric pulses. Any associated pain dissipates immediately after the electric pulses are discontinued.  Another immediate side effect that has been observed is minor irritation locally.

More delayed side effects can occur and include erythema, edema, and possible necrosis of the tumor. In most cases, patients typically only need one to three treatments, and each treatment under general anesthesia typically takes about 20 minutes. In some cases, tumors may need more than one treatment, especially if the tumors are large.

The treatment can be performed on an outpatient basis, it is safe, and shows good long-lasting objective responses in approximately 80% of patients.

Patients often require 1-3 treatments given once every 2-4 weeks, depending on response.

Local side effects, such as tumor necrosis, are to be expected pending the amount of active tumor that is being treated.

Supportive care, such as bandage changes, anti-inflammatories and antibiotics, are utilized until the treated wound has healed. 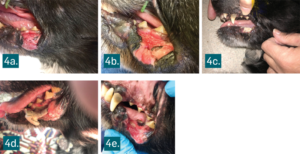