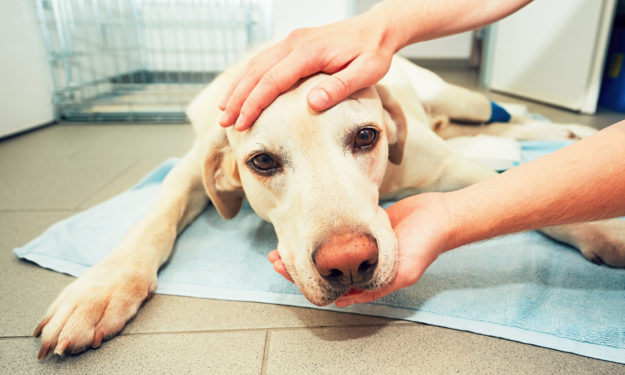 Initially it might seem only a little out of the ordinary that your otherwise healthy dog needs his or her water bowl refilled more frequently throughout the day. Or it might just be annoying when your cat starts asking for the bathroom sink to be turned on several (more) times in the day. Increased drinking can occur with hot weather and increases in exercise but assuming normal routine activities, a consistent uptick in the amount of water your pet drinks should peak your interest.

Waking up to take your dog out to pee during the night?

Increased urinating can be a little trickier to detect. In extreme cases it’s obvious: your dog is asking to go out at 2 a.m. or racing out at 6 a.m. when he/she would have otherwise snoozed until noon if left undisturbed. In other cases, it’s harder to pick up on; sometimes dogs are able to hold their bladders and the only sign is an increase in the volume of urine they produce each time they pee. Cats can be especially tricky. It’s easy to notice more urine if there is only one cat in the house and the litter box is cleaned daily – suddenly the clumps are huge! But it’s hard in a multi-cat household or with indoor/outdoor cats to really know what they are up to.

Increased drinking and urinating can be the first sign of a significant health issue.

Noticing an increase in either drinking, urinating, or both is a good reason to consult with your veterinarian. One important thing to know is that increased drinking is generally accompanied by increased urinating when it is associated with a disease process.

There is a fairly sizeable list of things that cause increased urinating and drinking – officially called polyuria and polydipsia and abbreviated as PU/PD.
In dogs some of the most common conditions that cause PU/PD are Hyperadrenocorticism (commonly called Cushing’s disease), diabetes mellitus, and kidney diseases of which there are multiple forms. In cats, some of the most common causes are diabetes mellitus, hyperthyroidism, and kidney diseases. There are several other causes of PU/PD that are less common including high calcium levels, liver disease, and Addison’s disease to name a few.

What Diagnostics are Needed?

The first step to figuring out if there is a serious concern is to have your pet examined by your veterinarian. At this appointment a physical exam and baseline blood work including a urinalysis should be performed. This blood work and urine evaluation is the same as typical wellness blood work that might be performed routinely in older animals or before a spay or neuter procedure in a young dog or cat.

These are simple tests to have performed and they give the most information. Diseases that can be confirmed on initial blood work include diabetes, hyperthyroidism, kidney disease, and a number of electrolyte abnormalities (such as high calcium, low potassium, or low sodium). This first round of diagnostics might also point towards another disease process such as Cushing’s disease, liver failure, and Addison’s disease. If that is the case, additional testing will be recommended to confirm the suspicion.

In complicated cases your family veterinarian may recommend a referral to a veterinary specialist such as an Internist, who specializes in Internal Medicine and diagnosing diseases. This happens in cases where the diagnosis are confirmed but there are complicating factors, the animal is also sick, or when the first round of testing does not give a clear answer as to why the pet is drinking and urinating more. Next steps may include blood pressure measuring, checking an ionized calcium level, bacterial cultures, abdominal ultrasound, or chest radiographs depending on what is indicated. These diagnostics can provide more answers and allow us to begin treatment of your pet through medication, home recommendations, or diet change.

While increased trips to the sink and frequent pee trips may just seem like an inconvenience to you at first, these may be signs of something more serious going on. If you notice these symptoms, please consult with your veterinarian for further diagnosis and treatment. You know your pet better than anyone, so they depend on you to notice even the most subtle changes in their health and behavior.