When your pet presents with nasal-related symptoms, your Internal Medicine Specialist may recommend a CT scan and rhinoscopy to try to determine the cause for your pet’s signs.

A CT scan and rhinoscopy is a diagnostic procedure, meaning the patient’s problem will not be fixed or improved following the procedure. Only in very rare cases, such as foreign objects and abnormal strictures in the nose, is a treatment for the problem performed simultaneously.

Does My Pet Need a Rhinoscopy? Signs & Symptoms

There are many signs that are not specific to any one particular disease process, but are very similar across all diseases that affect the nose. These signs may include:

Occasionally cats will present with significant increase in respiratory effort when their nose is congested as they rarely open their mouth to breathe.

What Causes Nasal Issues in Pets?

Diseases that can affect the nose include nasal cancers, fungal infections, anatomic abnormalities (both congenital and acquired), immune-mediated inflammation, foreign material in the nose, severe dental disease, allergic inflammation, viral infections, and rarely bacterial infections. Nose bleeds can occur in dogs and cats related to diseases outside the nose. In this case your veterinarian will likely recommend diagnostics such as clotting times, platelet count, blood pressure, and certain infectious disease testing prior to recommending a CT scan and rhinoscopy. Cats should have a blood test for Cryptococcus, a common fungal organism that affects the nose. 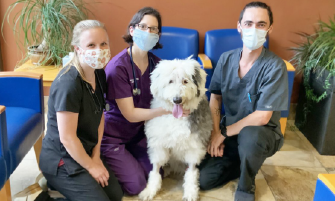 Bill, an Old English Sheepdog treated at Peak Vet Referral Center, had a rhinoscopy done for sneezing and chronic nasal discharge. This helped the doctor diagnose him with nasal aspergillosis, an infection caused by the Aspergillus fungus, for which he was treated for after.

Treatment: What Happens During a Rhinoscopy?

First, basic health screening blood and urine tests will be recommended as the procedure requires general anesthesia. Occasionally chest radiographs (x-rays) or an echocardiogram may be recommended as your pet’s condition dictates.

A CT scan (computed tomography) is an advanced imaging technique that allows for detailed three dimensional evaluation of boney (and some soft tissue) areas that are difficult to otherwise image. It allows the radiologist and internist to determine not only where in the nose is the problem located, but also gives some general idea of what the problem is. After the CT scan, if a space occupying mass (typically a cancer, but sometimes a fungal mass) is seen, a blind biopsy is performed with guidance from the CT scan so that the biopsy instrument is placed in the mass in order to get the best representative sample. If there is not a mass seen, or if the mass is in the very back of the nose, rhinoscopy will be performed to evaluate the nose and obtain samples of the nose.

Rhinoscopy is performed with a small flexible fiberoptic scope and occasionally a small rigid scope that can be advanced through the nasal cavities of all but the smallest patients. The back of the nose is examined with the flexible scope, and then the throat is packed off with gauze sponges. The scope is then advanced through the nasal structures in a systematic fashion. In order to facilitate visualization through the mucous and blood that are inevitably, a constant running saline flush is utilized. Foreign material can be removed using a small grasping forcep, or may be flushed out during the examination. After a thorough evaluation, nasal biopsies are obtained. A cat receiving a rhinoscopy after presenting with bloody vomit and bleeding from his left nostril. It revealed that he had multiple blades of grass lodged in his nasopharynx that was causing bleeding and irritation!

What to Expect After the Procedure

After the procedure, it is common to have some increased nasal congestion and bleeding due to biopsies and the presence of the scope. Nasal bleeding is not uncommon for several days following the procedure. Occasionally patients will spend the night to allow their family peace of mind and to keep the carpets clean. Patients can also be discharged that same night if the family would prefer.

Keep in mind that our procedures are scheduled with several services, and thus are subject to time change/delay. We will always try to keep to a scheduled time; however we may not have control over the start time. We will do our very best to keep you informed of significant delays in your pet’s procedure.